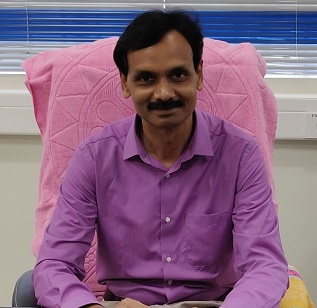 Dr. G. V.M. Gupta, specialized in Marine Biogeochemistry, took charge as Director of CMLRE on 16th October 2020. Dr. Gupta did his M. Sc in Chemical Oceanography from Andhra University, Visakhapatnam in 1992. He joined National Institute of Oceanography, Visakhapatnam as Junior Research Fellow under the project Coastal Ocean Monitoring and Predictive Systems (COMAPS) and worked on the estuarine/coastal pollution and biogeochemistry of the Bay of Bengal through extensive field surveys. He received his Ph. D from Andhra University in 1999 for his work on Particulate Matter Composition in the Bay of Bengal. He worked as an Environmental Manager in Baroda for one year before joining Integrated Coastal and Marine Area Management - Project Directorate (ICMAM-PD), Chennai as Scientist in 1999. His research at ICMAM was focused on ICMAM plan preparations and GIS based Critical Habitat Information Systems for ecologically sensitive regions. He worked extensively on the quality control aspects through inter-calibration exercises for network projects. He was first to conceive Ecosystem Modeling studies for Cochin estuary and Chilka lake and undertook multidisciplinary studies by integrating biogeochemistry and ecosystem dynamics. His decadal research gave impetus on carbon dynamics and emissions of carbon dioxide from these estuarine systems.

Dr. Gupta joined Centre for Marine Living Resources and Ecology (CMLRE), Kochi in 2009 and has undertaken biogeochemical studies of the Arabian Sea. His initiative on Kochi Time-series (KoTS) studies, for the first time, has tracked the upwelling and associated biogeochemistry from its onset to decay. His research on coastal deoxygenation has established its pivotal role in production of greenhouse gases and influence on the marine biota including fishery along the west coast of India. His contributions on coastal deoxygenation has given new dimension of understanding on its cause factors and also instrumental in evolving many new hypotheses. His studies have also helped in development and validation of coupled biophysical models towards capturing and better understanding physical and biogeochemical dynamics of the Arabian Sea. Through his concerted efforts Dr. Gupta has recently undertaken a mega time-series, multi-institutional and multi-disciplinary study Marine Ecosystem Dynamics of eastern Arabian Sea (MEDAS) to address many scientific and societally important issues through ecosystem approach. He was conferred the Ministry of Earth Sciences Merit Award in the field of ocean science and technology in 2017 for his outstanding contributions in the field of marine biogeochemistry.

Dr. Gupta has published over 80 research papers in peer-reviewed national/ international journals and proceedings, and delivered more than 30 invited talks in national/international workshops and meetings. He has produced around 20 technical reports and has successfully coordinated and executed more than 15 research projects. He is a reviewer for many national and international reputed scientific journals. Many students worked with him are well positioned in reputed institutes.